The Moose who came to breakfast
(and stayed)

Moose like the area where I am living - lots of willows to browse. I have to be careful returning up my driveway, as moose-car collisions. while often fatal to the moose, are also not uncommonly fatal to the car and even the driver. These are big critters, and they generally come through the windshield if hit.

These photos were all taken from the porch or window of the house where I am staying. The first three were January 25, around 2 to 2"30 pm, from the front porch or front window: 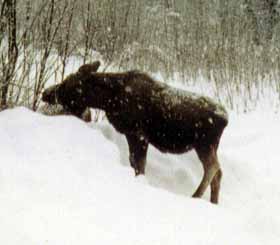 This is a calf, probably less than a year old. 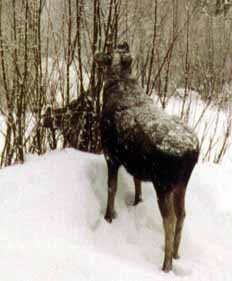 If you look, you can see mama moose's head just on the other side of the snow berm the calf has climed to help him reach higher on the willows. 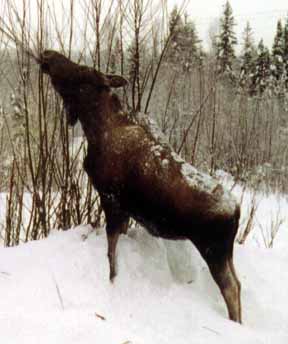 Babies really have to reach up to get those tasty wilows. 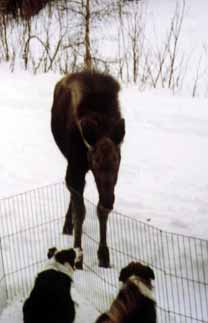 Then there was the morning (February 6) when I let the dogs ouut and my Border and one of the Shelties began barking their heads off. The moose calf had his head over the dog fence (a mere ex pen in that area) and the dogs were defending their territory. The calf had his neck hair up (note the "mohawk" appearamce of his neck) so the dogs had a very short potty break that morning. My BC, Dot, looked too much as if she would enjoy herding the moose. 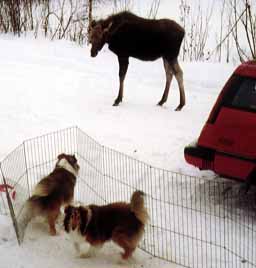 Forty-five minutes later the rest of the Shelties were practially crossing their hind legs and the moose had moved away to the willows behind the car, so I let Goldie and Molly out. The moose calf came back, his mane still erect. Eventually he left for the day, but I don't think he went far.

A month later (March 5) a friend showed up and they all three settled down for a comfortable rest in the snow. This and the next photo were taken from my back window, right next to the computer. The dark bar on the right of this one is the window frame. 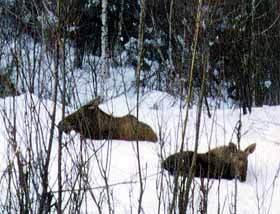 Cow and calf, taken frm a bit farther to the left of the window. 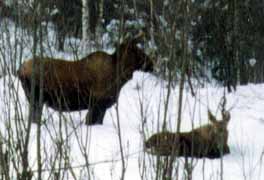 Eventually mama stood up. I tried for another photo later, but there wasn't enough light.
To Sheltie Bloodlines site
sbowling@mosquitonet.com